I must be forthright in admitting that this is the first real experience that I have had in a foreign city, and I am in awe. This does beg the question; Is it my naiveté, or is Porto really that beautiful of a city? I think the latter, and argue my case here:

Our arrival included a very fast taxi drive with a driver who spoke only a little Spanish (which helped) but did not know where our street was located! So, we weaved through these TINY cobbled streets into a sketchy part of town trying to find our flat. We finally found our spot and were relieved to see that it was a lovely location behind the Cathedral with many local residents surrounding us. You’ve seen our apartment in Isaac’s video, so you know what a delightful place this is to be- and at a fraction of what we paid in NYC and Austin!

We’ve relished the fact that we have not taken a train or taxi for four days. Each day we walk in a different direction and discover more treasures that this city has to offer. We’ve shopped for shoes (there are a plethora of stores, as many fine shoes are made in Portugal), gone to a huge farmers’ market, bought new cell phones and sim cards, and consumed more pastries and espresso than I’d like to admit. The kids learned the word Pastelaria very quickly! While the coffee and pastries are delightful, we have had a little trouble embracing the heavy meat, lamb, pork and seafood that make up the main dishes here. We actually found an Italian restaurant one night, an Indian food place another night, and gorged on a fresh salad and bread from the market another! 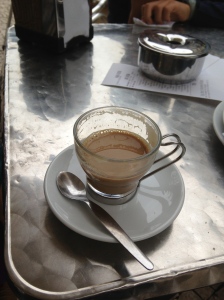 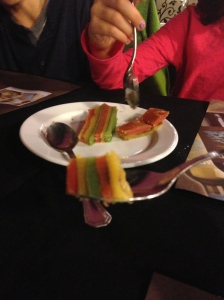 The age of this city is certainly evident in the buildings and streets. The charm and beauty can be found in both the grand avenues with extravagant buildings and carved façades, as well as the tiny stair stepped streets with tiny cafes and curious shops up every slope. Some doors are only four feet tall along the stair stepped streets as a normal sized door just wouldn’t fit! We can hear older couples chatting or arguing behind the doors as we pass by, so we know locals live in there!

We’ve spent a few hours in the famous Livraria Lello that was the inspiration for JK Rowling’s Hogwarts School of Wizardry and Witchcraft. We took a boat up the river and saw old monasteries, walls that are 1000 years old, and 6 bridges of different designs and eras connecting the two river banks along the way. We visited a famous palace today, El Palacio de Bolsa,  with a room covered with 18k gold leaf. We have gotten all over the city using our own power, up and down and up and down every Rúa and Praça with awe and delight.

Tomorrow we are taking the train up to the Historic city of Braga, which Ben has read about. We will just go for the day, as it is only a one hour train ride each way. Perhaps after visiting a few more cities, Porto won’t seem that special, but then again…

This entry was posted in Porto, Portugal.

This little city is so amazing! The people are so nice and the cobblestone streets are absolutely amazing. By the way when Susie said that this house was built in the 1700s she was wrong, it was built in the 1670s!

This entry was posted in Porto, Portugal.