The Alhambra and Generalife of Granada

My Family was somewhat relieved that our reservation to visit one of the most beautiful attractions in Europe was put back one day because it gave us more time to study up on the palace. The 13th century Moorish castle was ingeniously built with heated water (also used for pressurized showers) and invasion protecting zig-zag doorways which put all invaders at an extreme disadvantage. We studied up all night about the magnificent fortress and then slept in ‘till ten thirty, when it was time to head out. The SLOLerners roamed the streets of Granada until 14:00, when we hiked up the hill where the Alhambra was perched. We were greeted by a friendly security man who guarded a very old gate to the palace gardens, and then walked up a beautiful ascending trail full of autumn trees and mini waterfalls. As we arrived at the main gate, a view of three very differently aged buildings filled our eyes. There was a fairly large 16th century rectangular palace of Catholic style in the center of the grounds. It had really beautiful stained glass windows and an amazing interior courtyard. To our left was a huge 12th century fortress with a clearing in the middle. Inside was a footprint of the labyrinth of military barracks that used to be occupied by the Moors. To our right was the original castle; the main attraction of the Alhambra. A 13th century intricate palace designed with peaceful water fountains and white marble covering almost every surface. Most inside walls were decorated with beautifully intricate marble carving patterns. The main throne-room in the castle hosts a throne, but it doesn’t look much like a throne. The Sultan’s chair is a very simple wood and leather throne, and is about the size of a modern day folding chair. Edie and I had quite the laugh when we compared the really fancy thrones used in catholic rule to the Moorish ones. We noticed in one of the books we had read the night before that the Moorish had incorporated a few mathematical equations into the building. The mathematics that I liked most were the ones in the doorways. Each doorway represented an irrational number, such as the square root of two. This signified the infinite connection to Allah

After we had visited the magnificent palace, we headed for the old moorish community within the old fortress walls. It turned out that the maze like structures were actually the old houses, all worn down to only the walls. The surrounding structures consisted of huge walls with towers on every corner. The westernmost and tallest tower we were able to go up onto, and the views were fantastic. You are able to see all of the surrounding city and all of the mountains behind Granada. This view was not only beautiful to the Moors but was also very advantageous. Any intruders attempting to enter the Alhambra without permission could easily be spotted from this point. To protect themselves from invaders, the Moors also developed a zig-zag type shaped doorway to put any intruders at an extreme disadvantage. Apparently, these precautions were not enough, for eventually, the Catholics invaded the beautiful Muslim settlement and conquered it. Their mark; the palace in the center, can easily be identified as something that was not originally planned to be built there. Though the Catholics did tear down a portion of the Moorish buildings, at least they left the main palace and the fortress to stand.

Our final stop was The Generalife, (pronounced chen-eral-leaf-eh not general-life) a huge garden known as the “paradise on earth”. These beautiful gardens are full of un-native and indigenous plants and have a unique aggregation system that at the time of its construction was way ahead of its time. 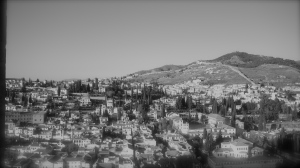 This entry was posted in Spain and tagged Alhambra, Granada.